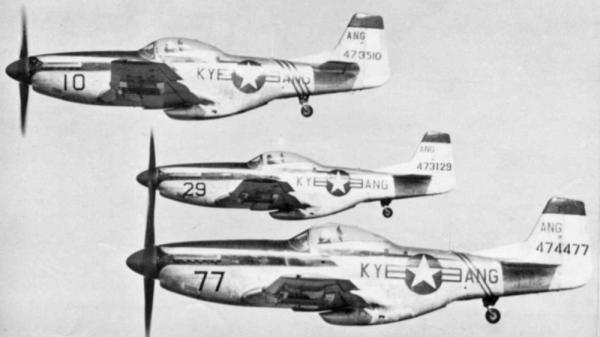 At least thats what the observers told the All Weather Flying Center, a subdivision of the air base, for their press release.

This was the second report of UFO sightings that day.

Earlier that day in Kentucky, Thomas Francis Mantell Jr., a 25-year-old member of the Kentucky National Air Guard and World War II veteran, was invited to investigate a report by the Kentucky State Road Patrol that something was flying over Maysville.

When Mantell and his wingmen (members of the squadron) reached 15,000 feet, he described, according to an analysis of the report recorded by the National Committee for Investigations of Air Phenomena, an object that was ?above me and [seemed] to move about half my speed? and was? metallic and is huge in size.? They decided to seguilo.

One of the pilots, Lieutenant BA Hammond, remembered how they could not receive oxygen even as they continued the climb: I felt a little shaky at 15,000 feet (4,500 m) because I realized we should take oxygen at 12,000.

I pulled next to Clements and indicated with gestures that I didnt have an oxygen mask.

Actually, I circled my finger around my head to show him I was getting dizzy.

He understood the situation and we came back.? Mantell kept the course, disregarding oxygen deprivation.

At 3:15, visual and radio contact with Mantell was lost.

In a house 56 kilometers from Franklin, Kentucky, six and a half years old William Hamilton saw an object as bright as an arc welder seen from a distance ?flying, with an F51 Mustang rising in his pursuit?.

Maues, who were at Cool Springs School and Cool Springs Church respectively, reported seeing a plane on a spiral descent around 3:30 p.m.

Inside the aircraft, Mantell was dead.

Your wristwatch stopped at 3:18.

The explanation given by the Army Air Forces Report of a Major Accident was that during the fulfillment of his orders, that is, to investigate the unusual phenomenon, Mantell suffered from oxygen deprivation: Since the velame latch was installed after the fall, I presume that Captain Mantell did not do any attempted to abandon the aircraft and was unconscious at the time of the crash or died from lack of oxygen before the aircraft began to spiral at about 30,000 feet (9,000 m).

In the chaos, the UFO was gone.

Jacobs notes, stimulated public interest to the point of changing UFOs from a niche hobby to a more common concern: Now, a new dramatic perspective has entered the thought of UFOs: they may be not only extraterrestrials, but potentially hostile too.

(Source) Unfortunately some feel that UFOs are guilty of errors in judgment on the part of humans..