Ceres, the dwarf planet between Mars and Jupiter, has water

Ceres, the dwarf planet you own?Lights? on its surface, which were explained by NASA as reflections on minerals, now brings us another surprise: it may have a small ocean beneath its surface. 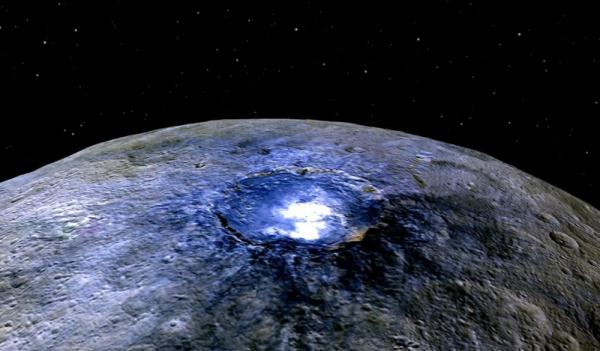 Dwarf planet may have ocean beneath its surface.

According to several new studies published today in Nature magazine, Ceres, the largest object in the asteroid belt between the orbits of Mars and Jupiter, probably holds huge reservoirs of sea water beneath its surface.

A team of researchers found evidence of one?extensive reservoir? of brine under the surface of the 20-million-year-old Occator crater in Ceres, using high-definition images of NASAs Dawn spacecraft.

Ceres is the only dwarf planet in the internal solar system.

It is only 950 kilometers in diameter and takes 1,682 earth days (4.6 years) to orbit the Sun, and a very thin atmosphere of water vapor from ice volcanoes.

Is the newly discovered reservoir approximately the size of the Great Salt Lake of Utah and is it believed to be filled with extremely salt water? which is what stopped him from freezing.

NASA spacecraft Dawn, a now retired space probe launched in 2007, obtained images of just 35 kilometers above the surface during a second pass in 2018.

The team analyzed infrared images and found evidence of hydrohalite, a material commonly found in Earths sea ice, which was never seen on another planet.

Scientists suspect that this reservoir was formed in Occator crater after another space rock impacted the site about 20 million years ago.

Scientists believe that after this impact, the surface of the crater froze, forming a large reservoir of melted water below.

Maria Cristina De Sanctis, researcher at the Istituto Nazionale di Astrofisica in Rome, Italy, co-author of one of the new articles and member of the Dawn team, told AFP: The material found in Ceres is extremely important in terms of astrobiology.

We know that all these minerals are essential to the emergence of life.

Dawns lead investigator Carol Raymond of NASAs Jet Propulsion Lab told Astronomy, ?Its really conclusive evidence, because youd expect it to disappear if it had stayed near the surface for millions of years.

De Sanctis told Astronomy: Previous research revealed that Ceres had a global ocean, an ocean that had no reason to exist [yet] and should be frozen now.

These latest discoveries showed that part of this ocean could have survived and be present beneath the surface..